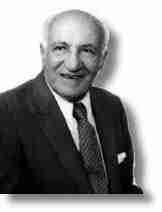 George M. Lamsa, Th.D., a native Assyrian, renowned scholar of the Scriptures, lecturer and author, F.R.S.A., was born August 5, 1892, in a civilization with customs, manners, and language almost identical to those in the time of Jesus. His native tongue was full of similar idioms and parables,untouched by the outside world in 1900.

Until World War I, his people living in that part of ancient Biblical lands which today is known as Kurdistan, in the basin of the rivers Tigris and Euphrates, retained the simple nomadic life as in the days of the Patriarchs. Only at the beginning of the 20th century did this isolated segment of the once great Assyrian Empire learn of the discovery of America and the Reformation in Germany.

Likewise, until that same time, this ancient culture of early Christians was unknown to the western world, and the Aramaic (Syriac) language was thought to be dead. But in this so-called “Cradle of Civilization,” ancient Biblical customs and Semitic culture, cut off from the world, were preserved.

Lamsa’s primary training as a boy was to tend the lambs. But, as the first-born son in his family, while yet an infant he was dedicated to God by his devout mother. Years after her death, when Lamsa was 12, her vow was renewed by native tribesmen, an ox killed and its blood rubbed on his head. This vow to God, Lamsa claimed, had always been part of him. “God’s Hand,”he affirmed, “has been steadfastly on my shoulder, guiding me in His Work.”

Lamsa’s formal studies began under the priests and deacons of the ancient Church of the East. Later he graduated with the highest honors ever bestowed from the Archbishop of Canterbury’s Colleges in Iran and in Turkey, with the degree of Bachelor of Arts. Lamsa never married, but dedicated his life to “God’s Calling.”

At the beginning of World War I, when Turkey started invasions, Lamsa was forced to flee the Imperial University at Constantinople, where he was studying, and went to South America. Living was hard during those years; he knew but three words in Spanish – water, work and bread. As best he could he existed – in the British Merchant Marine for a time, then working on railroads, in mines, and later in printing shops, a trade he had learned in college.

After arriving in the United States, in his early 20’s, Lamsa by day worked as a printer, and by night went to school. He later studied at the Episcopal Theological Seminary in Alexandria, Virginia, and at Dropsie College in Philadelphia.

It was through his struggles with the idioms of English, during these years, that Lamsa gradually launched in his “life’s work” of translating the Scriptures from Aramaic into English. Yet many years were to pass before the world received his translations.

First as a lecturer in churches and seminaries, in halls and auditoriums, before statesmen, theologians, groups of artists, actors and others, Lamsa received recognition as a poet-philosopher, and as an authority on all phases of Eastern civilization.

It was his own inner compulsion, and the urging of hundreds who heard him, that drove him forward, and brought about, after 30 years of labor, research and study, his translation of The Holy Bible from a branch of the ancient Aramaic language, used by Christians from earliest times; it is known fact that Jesus and his followers spoke Aramaic.

There were times when he was temporarily stopped in his translations, when the idioms in the manuscripts could not be given correct English meaning. Lamsa related, “Often I would lie on the bed with the script before my eyes (he had a photographic memory which retained chapter after chapter of Biblical passages), and suddenly the translation would come, the English words would fall into place. “I discovered that the words in the Bible contain power, that they are charged with the Holy Spirit. Everything comes and passes away, but God’s Truth endures forever.” It was Lamsa’s firm belief that his translation would bring people nearer to the true Word of God, and would facilitate understanding between East and West.

The last 10 years of his life, Dr. Lamsa tutored and prepared Dr. Rocco A. Errico to continue with the Aramaic work. He died on September 22, 1975 in Turlock,California where he is interred.